Artist
1 video
"A Cheerful Temper", the name of Robert Babicz's debut album for Systematic Recordings is arguably the best way to describe the Cologne based Pole. Answering the question why he is choosing this specific name, Babicz explains that he feels caught between two worlds: "The real world of everyday life and a surreal dream world comparable to the backdrop of a fairy tale." Robert's musical career starts out quite exceptionally and indeed rather fabulously in the early 90s. Right after the phenomenon of Chicago and deep house, techno began to establish itself as a brand new and totally original part of youth culture. In 1989, the year the wall came down, Berlin sees the first big techno happenings like Love Parade and Teknozid. But Cologne also sees many new clubs like the Space club or the Sweatbox. Pioneers of these days were Reinhard and Wolfgang Voigt (now running the Kompakt empire), The Modernist, Mate Galic, Roland Casper and Rob Acid (aka Robert Babicz). Robert's first release "Happy answer" becomes an unexpectedly big hit. Especially in the UK, on the label London Records the track storms the charts at the same time as M.A.R.R.S. "Pump up the volume" and "Theme from s- express". More and more acid house influenced records come out and soon they dominate
club culture. Of the time Robert wistfully remembers: "It was an incredibly exciting but also very excessive time of my life with loads of wonderful moments and parties."
At the end of the 90s Robert withdraws somewhat in order to reflect and to reinvent himself. He begins to produce records as Atlon Inc and Dicabor, with an identity completely opposite to that of Rob Acid productions. The quality and the sound standard of these ambient projects become more and more important in his work and at the same time they improve it as he masters new equipment and techniques. In 2001 he meets Marc Romboy and Klaus Derichs and together they create a new platform called Shortcut Recordings dedicated to Robert's club tracks. After a period of calm and relaxed tracks it is now time to pump up the volume and raise the BPMs again. His productions become very technoish at this stage, moving away from his acid house influences. After Robert collaborates with Marc Romboy on the label Le Petit Prince, Romboy creates Systematic Recordings in the summer of 2004. He asks Robert to remix his first single with the Detroit legend Blake Baxter and to do a new version for Berlin's house impresario Phonique. On top of that Robert starts to release singles on high profiled imprints like Kompakt, Treibstoff and Steve Bug's Audiomatique.
Those who are following Robert's career over the years, know that his sound and the standard of his productions reach almost audiophile standards. No surprise then that many well known artists like Martinez, Minilogue or Gabriel Ananda request his special abilities for mastering their productions. One reason for his famous sound stems in part from his collection of old analogue equipment (even from the 60s and 70s) which Robert uses alongside his computer. Besides drum machines like the famous Roland TR808 and TR909, Robert owns a variety of unique machines like special effects and EQs the size of living rooms, some taken from German TV stations to edit their movies and crime shows. He even uses equalizers used by the secret service and compressors used by East German radio stations.
It is no wonder then that the sound quality of the album is both graceful and crystal clear. Tracks like "Sin" and "Loosing Memories" surprise with their club compatible deepness while at the same time moving between the genres of Electronica, Techno and classic House. 'A Cheerful Temper' is indeed a very special and genre-breaking album full of beautiful electronic club music.
Please have a look on Robert 's webpages not to miss one of his legendary live shows in your area. Apart from other producers Babicz does not play as a DJ but as a real live act without any playbacks. Any of his shows is distinctive and individual as he never performs the same songs and sounds. Robert is on extended album promotion world tour in 2007. 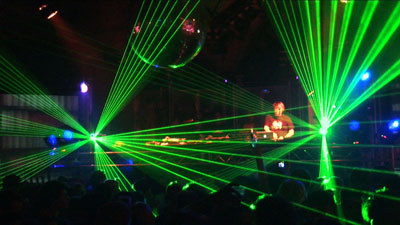