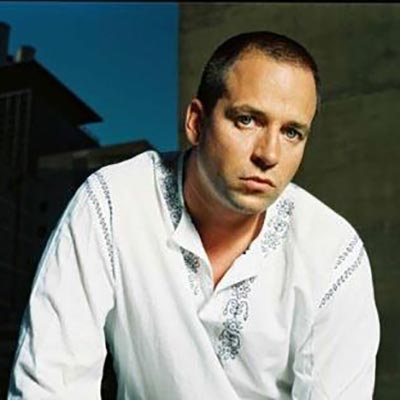 Worldwide chart successes and appearances in the best clubs of the world have been part of his career as well as his activities as VJ or radio host.

You just can't be mad at him: champagne, nipple slips and frenzy belong to every music event. Still, Tom Novy seems to attract them in a very special way. No wonder, after all he is one of the few exceptionally gifted artists in the music scene.

Worldwide chart successes and appearances in the best clubs of the world have been part of his career as well as his activities as VJ or radio host.

Tom Novy was born on the 10th of March 1970. He released his first record "I House You" in 1995 and directly entered the top 10 of the Germand Dance Charts. Only one year later he gained international reputation with his single "Superstar", which climbed on position 15 in the Media-Control Charts in Germany and onto top positions in 18 other countries. 1998 was the year of "I Rock", which became not only a chartbreaker but a real House anthem. "I Rock" stayed over 10 weeks in the Media-Control Charts and even 20 weeks in the Airplay-Top-100.

His Single "Pumpin" reached #19 of the UK Charts in June 2000. In the same year, Tom Novy became the first ever German artist to mix the "Ministry of Sound Annual" Compilation.
His 2001 released debut album "My Definition" (Top 30 - Media Control) and featured the opener track "Welcome to the Race" (official Mercedes-Benz formula 1 Nurburgring Track) with singer Lima Ben-Jannett.

His single "Lovin U" in 2004 became a worldwide success, also in South Africa, where Tom took the top 10 by storm. Back in Germany, "Take It" featuring Lima became the most aired Dance tune in German radio and made it into the top 20.

Furthermore, Tom Novy hosted several tv-shows, among them "Dance Floor Charts", "Streetlife", "Battle of DJ's" and "Nightlife" on MTV, as well as the "Mac Chart-Show" (2004) on Pro 7.

Moreover, Tom continues to mix a weekly radio show on FFN and has already been hosting a show for Radio Energy Munich since 1999. Additionally, he will put his hands on the popular Energy Mastermix - broadcasted on all Energy frequencies.

Tom Novy | Be at Space | Ibiza